As the Pokémon Gen 3 decompilation projects mature, some of my focus has shifted to improving the developer experience. One of the painpoints of working with the Gen 3 engine is comprehending existing event scripts and writing new scripts. Poryscript is a higher-level scripting language that makes writing scripts much simpler. In this blog post, I explain the motivation behind Poryscript and how it works.

I’ll be referring specifically to pokeemerald for the rest of this post, but everything also applies to pokeruby and pokefirered.

As mentioned above, the pokeemerald scripting engine can be painful to work with. Let’s try to understand why.

The scripting engine uses a data-driven approach. Scripts are written in bytecode which is composed of commands, comparisons, and jumps. Those bytecode commands are read and interpreted sequentially by the game’s scripting engine. (The command interpretation functions are located in src/scrcmd.c). The scripting bytecode commands are defined as assembler macros–these are human-friendly names that translate directly into bytes when the code is assembled into the final game ROM. Here is an example of a simple script when the player meets their rival on Route 103:

If you squint your eyes, it’s not terribly difficult to follow the logic of this script. It checks the player’s gender and displays the opposite-gendered rival’s message. However, there are several ergonomic problems that make developer lives difficult.

As a script grows longer and more complicated, this complexity multiplies until it’s one giant hairball. It’s not uncommon for a single script to branch > 10 times or even use loops. There is certainly opportunity to improve the experience when using this scripting system.

Above, we identified three problems with the bytecode scripting. Let’s look at how we could address each of them.

This is one script, but it looks like three separate scripts.

The reason that script looks like three separate scripts is because of branching logic. Every time a conditional branch (also knows as a jump) occurs, a new scripting block is defined. This is because the scripts are implemented as assembler macros, so a label needs to be generated for the branch destination. It would be nice if the destination branch could be automatically generated.

Branching logic is composed of two parts. First, a comparison happens. This is usually a compare command, but there are other commands like checkflag which also trigger comparisons. Second, a conditional branch occurs. This is a command that checks the result of the previous comparison and decides whether or not it should jump to the destination. Combining these two operations would remove some verbosity and simplify things.

The text is referred to with a label in the scripts above. In order to see what the text actually says, the developer needs to go manually find it. This text might live in a completely different file than the script itself. If the text were somehow directly-inlined in the script, it would remove that cognitive overhead.

Poryscript addresses all of those issues by introducing some high-level control-flow constructs and syntactic sugar. When designing Poryscript, I started by writing out what I felt was a reasonable way to write scripts. The syntax I settled on looks like this:

This makes it very clear what the entire boundaries of the script are. All branching logic is handled by familiar if-else statements. Text is directly inlined to the command, so that you don’t have to switch between contexts to know exactly what the rival NPC says. At this time, Poryscript supports many different control-flow structures, such as if-elif-else, while, do..while, and switch. The high-level language is automatically transpiled into the original bytecode scripting language. Let’s dive into the challenges behind that.

Since the game engine doesn’t understand Poryscript, the Poryscript transpiler converts Poryscript language into the bytecode commands that pokeemerald understands. The main challenge with that process is handling branching flow. Recall that the bytecode language needs a new scripting block defined for any branching flow. This means that Poryscript needs to correctly and efficiently create these blocks. The algorithm itself is not as complex as I expected it to be, however, there were many small details that needed to be fleshed out. We know that Poryscript needs to emit many blocks that jump to each other. To facilitate that, we can define each block as having the following structure:

By carefully constructing every Block with this format, we end up with an interconnected list of Blocks that represent the entire control flow of the script. Let’s look at how that works for the if/else logic in the script above. 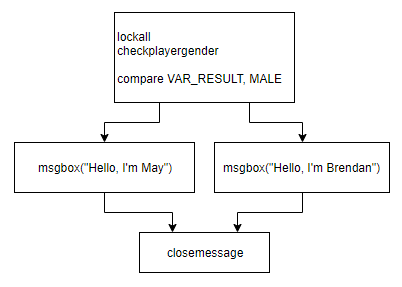 The blocks form a directed and fully-connected graph. Since each block knows its destination Block(s), the Poryscript transpiler can render the equivalent bytecode script commands by including goto statements to jump to each Block. Without optimization, the resulting bytecode script is shown below. (Block numbers can be seen in the suffix of each label.)

The result can be optimized further by reordering Blocks to take advantage of “fall through” behavior, which reduces unnecessary goto commands. Let’s say Block A jumps to Block B. If Block B is moved directly after Block A, then Block A doesn’t need a goto command to navigate to Block B–it will “fall through” naturally, since it’s the next bytecode command. The optimized version of the above script looks like this, and it only requires two goto commands instead of four:

There are many more features of Poryscript not covered here. You can read about them in the official project README. Hopefully this post provided some useful insight into how Poryscript works, and why it’s useful. I anticipate it will be used by most serious projects based on the Gen 3 decompilations, due to the significant ergonmic benefits it provides. There is also potential for it to be extended to support other scripting engines, like pokecrystal.

Feedback and issues should be reported via the Issues tab on GitHub.